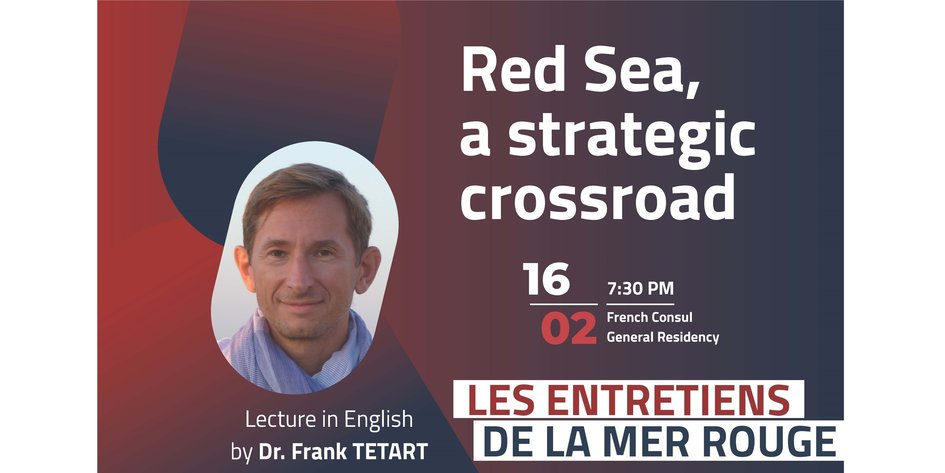 The Consul General of France in Jeddah, Mr. Mostafa Mihraje, hosted on Sunday February 16, 2020 at the Résidence de France a conference on "The Red Sea, strategic crossroads" as part of the "Les Entretiens de la Mer Rouge" cycle given by Mr. Franck Tétart, Doctor in geopolitics.

Dr Frank TETART graduated in geopolitics, international relations and holds a master’s degree in German. He teaches in particular at Paris-Sorbonne Abu Dhabi, Paris 1 and Paris Sud. He has been one of the co-authors of the television show Le Dessous des Cartes since its creation and participated in the launch of the magazines Moyen-Orient and Carto (2009 to 2011). Since 2013, he has directed the annual edition of the Grand Atlas (Autrement).

The Red Sea is a geostrategic zone. The nerve road of world trade since the breakthrough of Suez, it connects the Indian Ocean to the Mediterranean. Today, it is at the heart of regional issues linked to the security of the Arabian Peninsula, to the rivalries, challenges and threats that weigh upon the globalization of trade.

“Les entretiens de la mer rouge” is a cycle of multidisciplinary encounters relating to history, literature, natural, built or intangible heritage, as well as to ancient or contemporary societies which have structured or animate the Red Sea basin.

The conference, organized by the Cultural Department at the French Consulate General in Jeddah, brought together 70 guests.